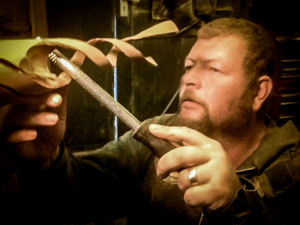 Darren has had a passion for timber almost as long as he’s been able to walk.  As a toddler he spent time watching and learning in his grandfather’s workshop, where the deep desire to create art from timber was passed between the generations to Darren.

However, it was chance meeting with Dave Roberts RPT, a true craftsman with wood, that changed Darren’s life. Dave introduced Darren to the world of lathe turning, offering him the chance to learn turning for himself.  After only a few lessons Dave announced that no more lessons were needed, that Darren had “the touch” and he should go off and create… So create he did, experimenting with a wide range of timbers and techniques; the more he learned, the more his desire to create art from timber grew, building a love that has never, and will never leave him.

In 2011 the opportunity arose for Darren to spend much more time in his rural workshop and develop his artistic style: a very organic look with natural edges and burring, inspired by the surrounding landscape, the colours and forms created by nature, and the beautiful timber that he sources locally from storm-damaged trees.  All of his sculptures are formed from timber that would otherwise be burnt or left to rot, timber that very, very few people would have the courage to attempt to turn, or the ability!

Achieving this distinctive organic style required him to develop a unique and more precise method of turning giving his turned work its signature look, a look which now carries on through into his hand-carved and sculpted pieces.

Darren is a Registered Professional Turner, supported by The Worshipful Company of Turners based in London, and derives from one of the original ancient Livery companies of the City.  He is also a member of Dorset Artists Group, and the New Dorset Art Group, and has successfully participated in Dorset Arts Week followed by exhibitions at NT Stourhead, Bridport Arts Centre, Cygnet Gallery, Dorset Art Fair, Amnesty International Bournemouth, and the Metropolis Gallery, Westbourne.  He has been featured in several Art and Design magazines, Arkadia, Dorset life and tourism magazines, and has been invited to appear at the Salisbury Contemporary Craft and Heritage Fayre at Salisbury Cathedral.

Currently his work is available through:

l’Artishe Gallery, Swanage (http://www.lartishegallery.com/),
Dansel Gallery, Abbotsbury (http://www.danselgallery.co.uk/),
and at various exhibitions and shows, or direct from the artist.

Theme by Anders Noren — Up ↑